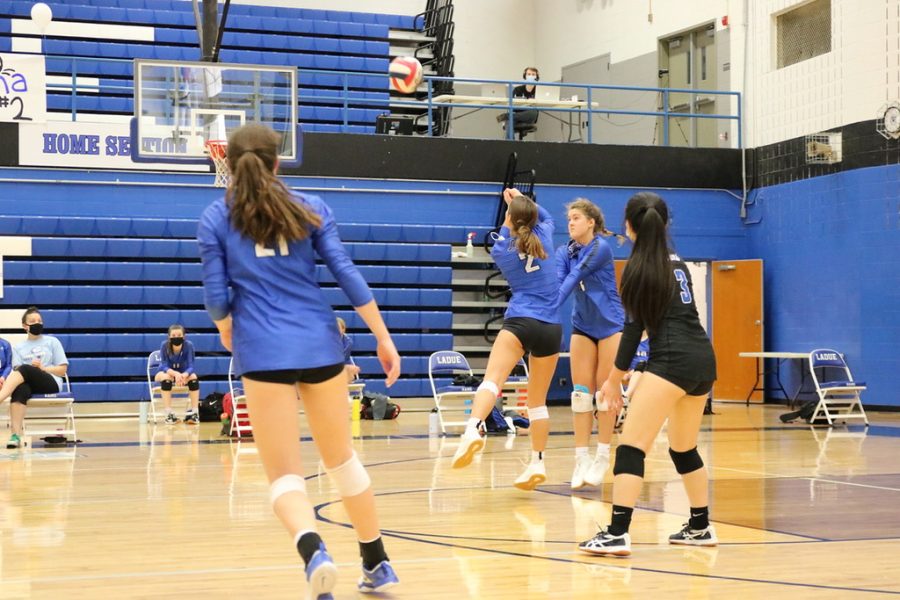 Sweat beads trickle down her face onto her neck as sophomore Claire Kienstra goes to wipe it with the collar of her shirt for the tenth time. Kienstra quickly gets in a few reviving sips of water in-between her volleyball games. Unlike most other players on her teams, Kienstra participates in both teams: JV and Varsity. Kienstra has specific roles on each team, a setter on JV and setter and defensive specialist (DS) on Varsity.

Throughout the whole day on Saturday, September 18, the Varsity volleyball team will be playing in the Rockwood Summit Tournament, according to the Ladue Activities website. Volleyball tournaments usually consist of two to three pools and in each, there are around four teams. Although many teams are competing, Kienstra still looks forward to competing.

“Our first couple of games were a little rough,” Kienstra said. “We didn’t have a ton of time to really practice, especially last year with COVID, and we didn’t really get to know anyone too, so that made it more difficult. But, we’ve definitely been practicing a lot now, like doing drills and running. On Friday mornings at six am, we are out on the track. We can [also] use what we learned from previous games to help us prepare.”

Currently, the Varsity team has a record of 1-5 with no injured players. While there will be good teams attending the upcoming tournament, Kienstra believes that it’s only until she witnesses the opposing team in a game or tournament then she can get an idea on whether or not they are good.

“We only played 10 games last year, no tournaments,” Kienstra said. “It will be exciting to see new people instead of playing against the same girls. I’m so happy to really get to play as a team and have a full season since we didn’t have that last year, particularly because last year, as a freshman, I wanted to have team bonding sessions and that never really happened.”

Even though volleyball requires time commitment, Kienstra still enjoys taking part in JV and Varsity. From third grade, volleyball has been more than a sport to her – it’s a significant element in her life.

“I would like to play more on varsity, but they have a lot of good girls that play on varsity so we’re all competing a lot for the same spots,” Kienstra said. “I absolutely have various things I should need to work on, and I know what they are. I’ve been working hard on them during practice and that’s my goal. It is just to get better as an overall player.”