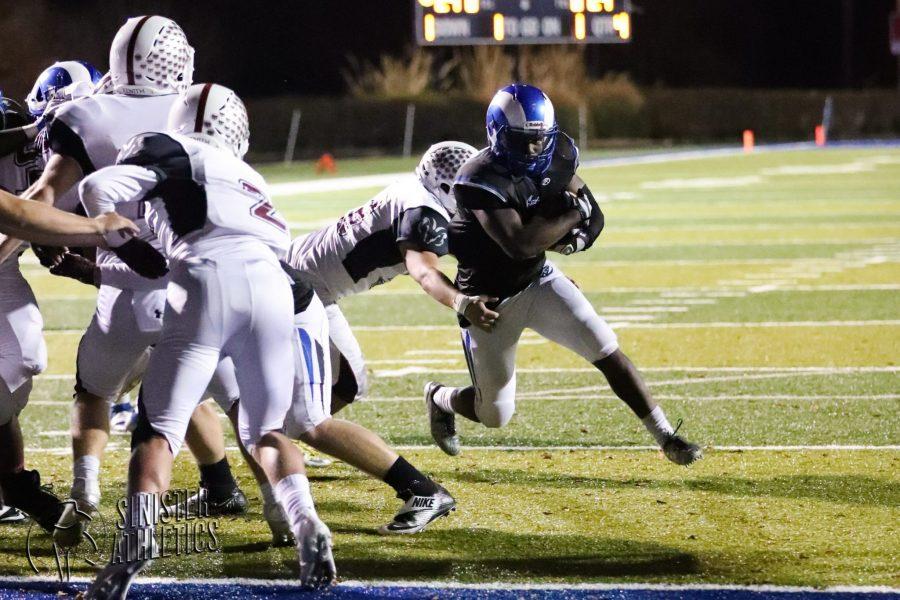 Ladue running back Chino Davis scores with just under 40 seconds to play, This touchdown gave the lead to Ladue for good. To see more photos of the Ladue football team, check out www.SinisterAthletics.com

Difficult? Certainly. Improbable? Definitely. But nothing is impossible for the Ladue football team this season. Ladue played MICDS Nov. 4th in a battle of the Rams and came back, against all odds, to beat them 37-29 in the final seconds and claim the Class 4 District 2 championship.

“We knew it was going to be a big game,” senior running back Chino Davis said. “There were going to be a lot of emotions because [MICDS] is located on Warson, which is just up the street. We were ready to play.”

After building a 10-0 lead by halftime, Ladue still held the lead with six minutes remaining in the fourth quarter. However, after a two fumbles and two MICDS touchdowns, Ladue found themselves down 29-17 with only four minutes left. An efficient drive full of short runs and quick passes brought Ladue down to the goal line, where senior quarterback and former MICDS player Jordan Jackson ran the ball in for a touchdown. Ladue got the stop they needed, but they started their next drive at their own 17-yard-line, in need of a touchdown. With under two minutes on the clock, Jackson completed a 60-yard pass down the middle to senior wide receiver Zach Bush, who finally fell at the 31-yard-line.

“We came into the game thinking we were going to pass a lot more, because in our last game, we rushed for over 300 yards,” Jackson said. “We knew MICDS would try to stop our running game. Passing was really our game plan.”

Despite that, Jackson converted a 4th-and-6 situation with his feet. After that, a 7-yard pass to senior Tyler Love put Ladue at the half-yard-line. Davis finished the drive off with a dive into the end zone with 30 seconds left.

“It was a great feeling to know that we came back and won,” Davis said. “It wasn’t just me, but the whole team that scored that touchdown.”

After gaining nothing on three pass attempts, MICDS tried to lateral their way to a touchdown but failed. MICDS fumbled into their own end zone, which was recovered by Ladue, securing the win. For Ladue, the game was something they had prepared for.

“There was a big change in intensity. We always practice like that, fighting through adversity every day in practice,” Jackson said. “It was just like any other day.”

The Ladue Rams football team will face Cape Central Nov. 11. Players are looking forward to proving themselves in the coming week.

“Last week, we weren’t as focused as we should’ve been,” Davis said. “This week, we’re going to watch more film, pay more attention in practice to our coaches, and overall be more ready to play.”