Ladue Pulls Out Narrow Victory over Whitfield in MICDS Tournament 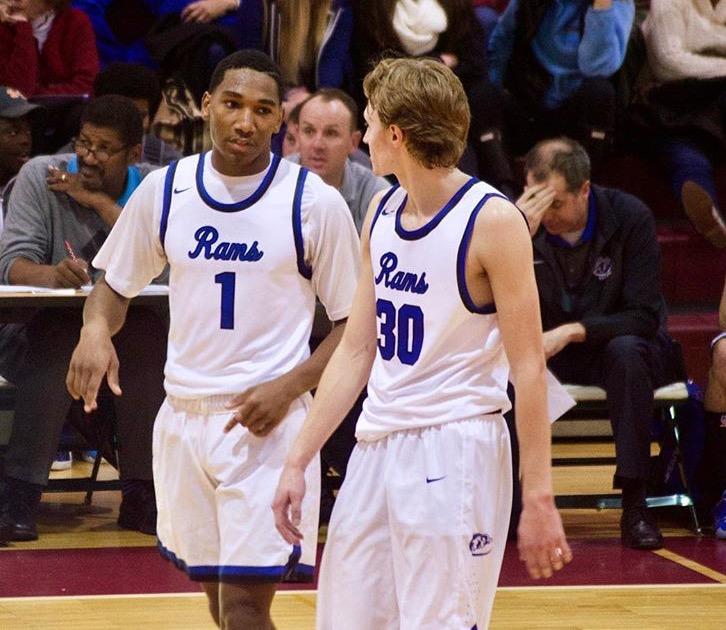 With the ball stuck in the corner and the clock winding down, Ladue boys’ varsity basketball coach Chad Anderson screams, “Timeout! Timeout!” The refs don’t hear him, and award Whitfield the ball with 3.4 seconds remaining. Down by two, Whitfield junior guard Amechi Ramsey receives the inbound pass and launches a corner three that banks too hard off the backboard– but it’s still not over. A Whitfield forward grabs the rebound and frantically tosses it towards the rim. His shot hits nothing but the air in front of the rim, though, and Anderson pumps his fist like Tiger Woods as time expires. The Ladue Rams had overcome the odds and advanced in the final seconds of a tense game.

Ladue had to pull every trick out of their bag to hold off Whitfield High School Dec. 26 in the second round of the MICDS Holiday Invitational Tournament, 66-64. It wasn’t the first time there was a nailbiter between the two teams.

“I’ve been coaching against [Whitfield] for years, and almost all of our games have come down to the wire like that,” Anderson said. “Both teams are well-coached and have always had pretty decent players.”

A nailbiter seemed impossible after the first quarter. After a flurry of threes, steals and fast-break layups, Ladue had a commanding 22-8 lead after the first eight minutes.

“We knew it was going to be a tough game, so we were surprised when we jumped out to a lead that big,” Ladue senior point guard Zach Bush said.

The game intensified quickly after that. Whitfield reduced the deficit to 10 points at the half, and then to five after the third quarter.

“We let off the gas pedal and let them come back in the game,” Bush said. “Once they get momentum, that’s a hard team to stop, with Torrence [Watson] and all the other players they have.”

Whitfield junior Torrence Watson was indeed a threat throughout the game, totaling 26 points even with Ladue’s focus on him. Despite his efforts, Ladue kept up with Whitfield, resorting to gritty, intense defensive tactics.

“We had to limit Torrence Watson a little bit,” Anderson said. “We really needed to help out on him and take some charges. We took 12 [charges] in that game. I think we got two calls in the last three or four minutes of the game. Whitfield is the type of team that likes to go to the basket, so we had to help out.”

Nearing the game’s end, Whitfield had the lead, at 64-63. With 44 seconds left, Ladue senior forward River Rhoads buried a clutch wing three to put Ladue on top. On the subsequent Whitfield possession, Ladue took a charge with 12 seconds left.

Eventually, Ladue celebrated a narrow victory and moved on to face Parkway South in the semifinal of the MICDS Holiday Invitational Tournament. Bush– who scored 15 points against Whitfield– accurately describes the game’s bottom line.

“We fought through adversity, kept the end goal in mind and found a way to win,” Bush said. “We did what we needed to do and that’s all that really matters.”